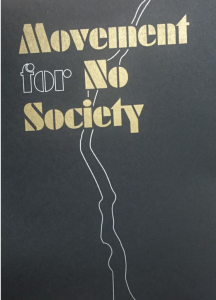 Pacifist ideals and reformist strategies have long held sway over the radical imagination in Philadelphia. Insurrectionary activity is willfully misunderstood, and its historical legacy largely forgotten. One of the ways we have tried to break this hold is through a series of talks called „Movement for No Society.“ In these talks we explored some of the historical conditions

for our situation and attempted to recover more interesting insurgent possibilities and their paths through Philadelphia’s history. Our research for these talks eventually became this book.

This event will draw on the historical legacy of anarchist activity in Philadelphia to consider how it relates to the anarchist space in Graz. There will be a short presentation on 2 groups, one from the Black Power era (Revolutionary Action Movement) and the other from the anti-nuclear movement of the 70s and 80s (Movement for a New Society), which provide contrasting historical models. We will consider the differences between the two groups and have a discussion on how this history compares to the local context.

This entry was posted in General. Bookmark the permalink.